Hello again!  So I have decided to do another recipe from the YOU Magazine extra full of Mary Berry recipes as the last one went down well.  This one is a scrumdiddlyumptious chocolate and ginger cake – perfect for this sort of weather with just a hint of spice mixed with indulgent chocolate.  You can also find this recipe online if you search the recipe name (again, here it is on the Sainsbury’s website).

*For this recipe make sure you have 2 loose-bottomed, round sandwich tins which are 20cm (8in) diameter and 4.5cm (1¾ in) deep* 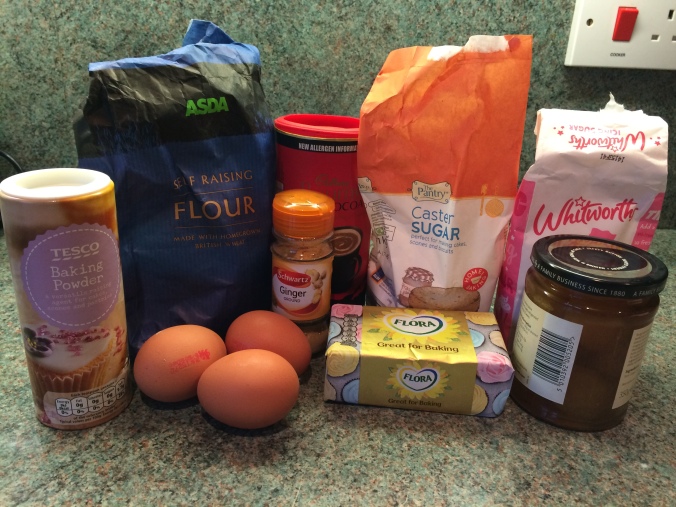 (You can see that I chopped the butter into small cubes – just to make life easier!) 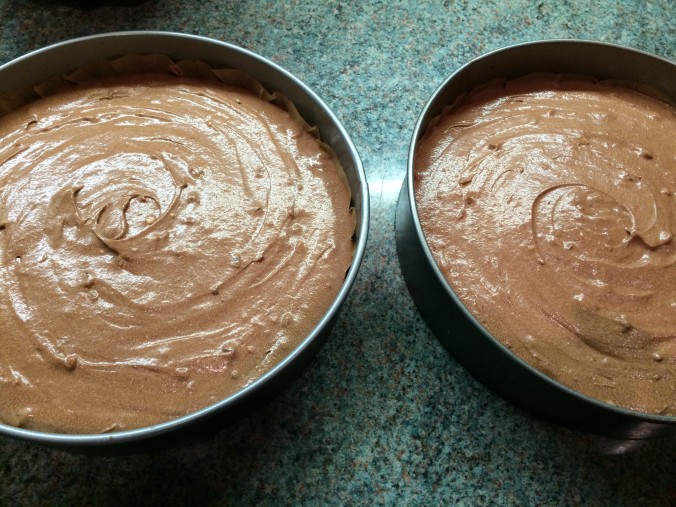 (As you’re making a chocolate cake it can be a little harder to tell if the cake is cooked by just looking at it, so you can always check pressing your finger on the sponge gently to see if it feels firm and springs back or by inserting a skewer and see if it comes out clean.)

(I actually should have left them in the tins a little longer as some of cake came off because it was still so warm and moist – but I picked up the runaway cake bits and set them aside.) 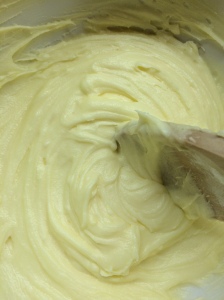 Look how purdy it looks! 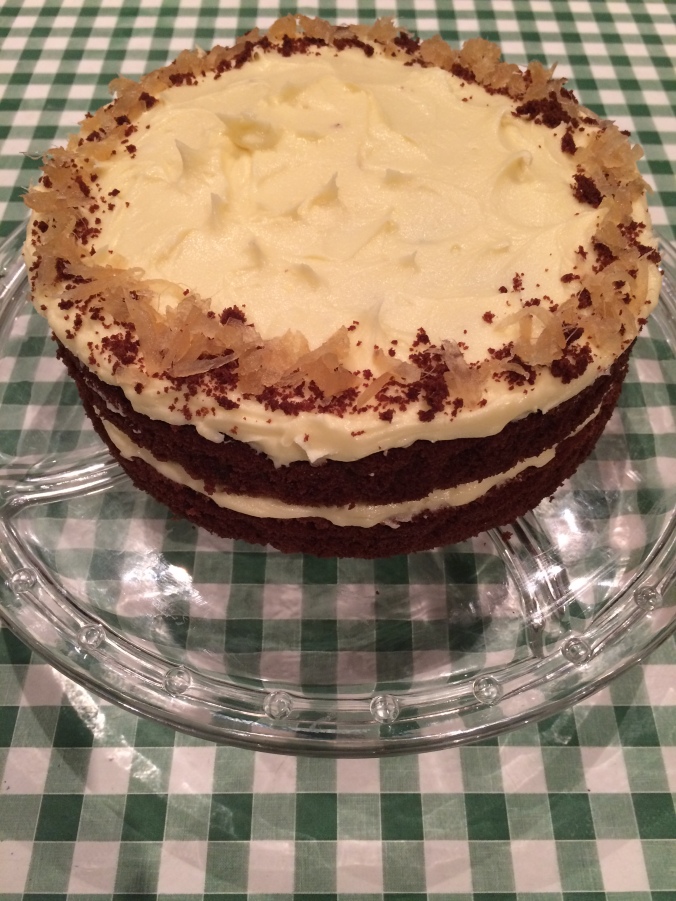 I LOVE Mary Berry recipes, I think she has some great ones to try so you should give one of them a go!  The other thing I love about her recipes is that she normally includes some great baking tips that make your life a little easier and that you can apply to other recipes.  A slice of this cake goes great with a cup of tea after a hard day’s work and makes for a yummy treat this time of year as the ginger adds such a nice kick of spice and sweet in one.

What are you favourite chocolate and ginger recipes – are there any others that I should try?  Leave your comments below and don’t forget to like if you enjoyed this post (and follow me via the links on the right as well). 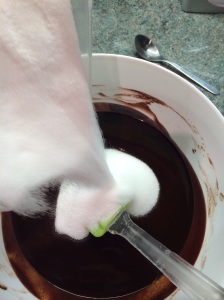 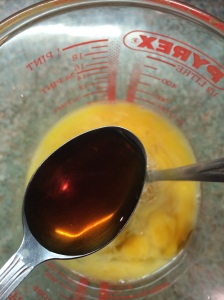 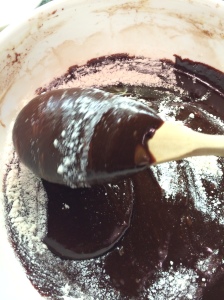 Ok, ok so I sort-of-but-not-really promised a post about making profiteroles almost a week ago now and as you may have noticed – no profiterole post.  Oops.

In all fairness, I have been fairly busy this week and have been playing “mum” (my actual mum has gone to Pakistan).  I have been looking after my little sister who had just started school again, and it has been somewhat horrific waking up at 7am to make sure she has everything she needs for the day.  Also, I have been helping out with the school run with my dad to help take special needs children to school in the mornings and afternoon.  On top of that I have been cleaning the house and cooking so we don’t all starve to death in a dirty house!  I told you I was busy!

Anyway, back to profiteroles. I don’t know about you but I LOVE profiteroles – pastry = good, whipped cream = good, chocolate = GOOD.

I could probably eat a whole batch by myself.  I’m not sure why, but I always thought it might be difficult to make choux buns for some reason (perhaps it’s the fancy French name that put me off) but after I read a couple of different recipes it didn’t sound so hard.

I typed “How to make profiteroles” into the search engine and BAM!  There they were, recipes galore!  I finally settled between two BBC Good Food recipes.  The first was a recipe which included a step-by-step video with Lesley Waters and the second is a recipe from James Martin.  I used the James Martin recipe to make the choux pastry and the Lesley Waters for the chocolate sauce as I thought it sounded nicer. 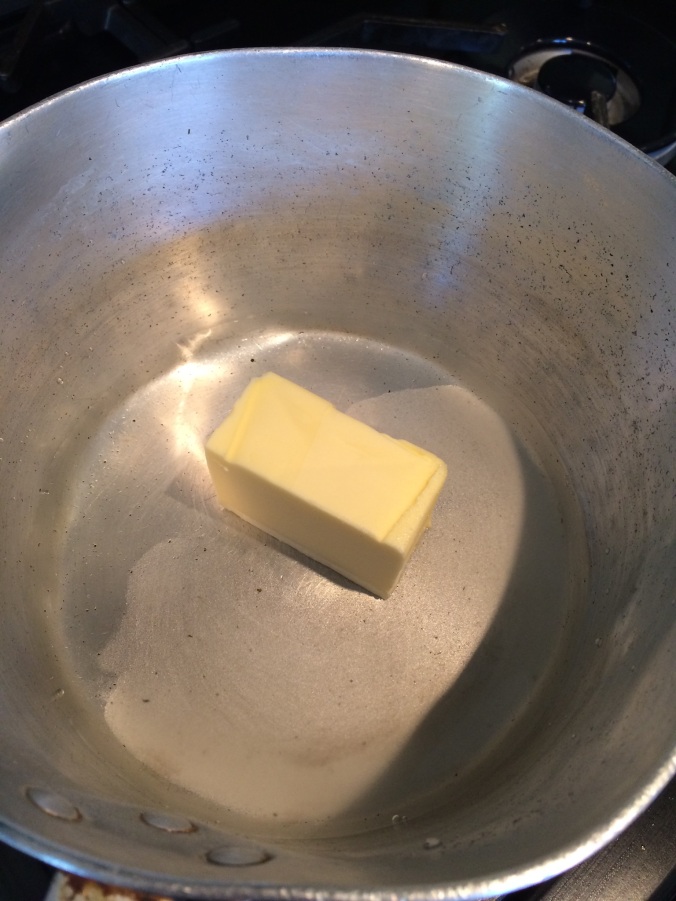 (The next few steps require some good ol’ elbow grease!)

When cooking or baking, it’s always good to use a little bit of initiative rather than just following a recipe word for word as sometimes I find I need a little more or a little less of certain ingredients in order to achieve the finished result.  For instance, in recipe here, it tells me I need 3 medium eggs (beaten) in order to achieve a “soft dropping consistency” but I found that I needed one more to get it just right. 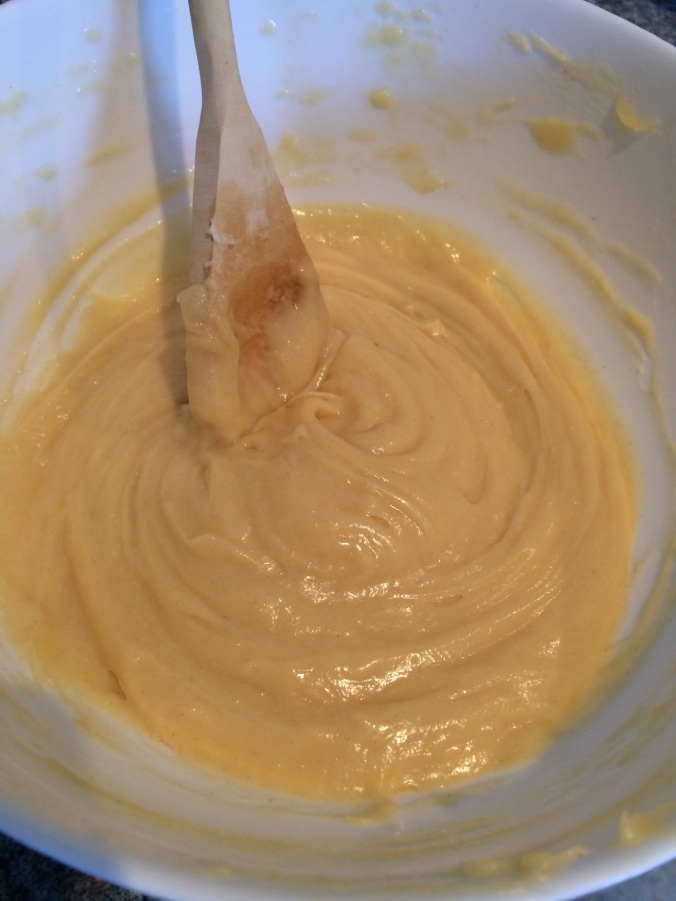 As you can see, I started off well(ish) but I probably shouldn’t have added the ones at the bottom as it didn’t leave enough space between them – what can I say, I had a bit trigger-happy! 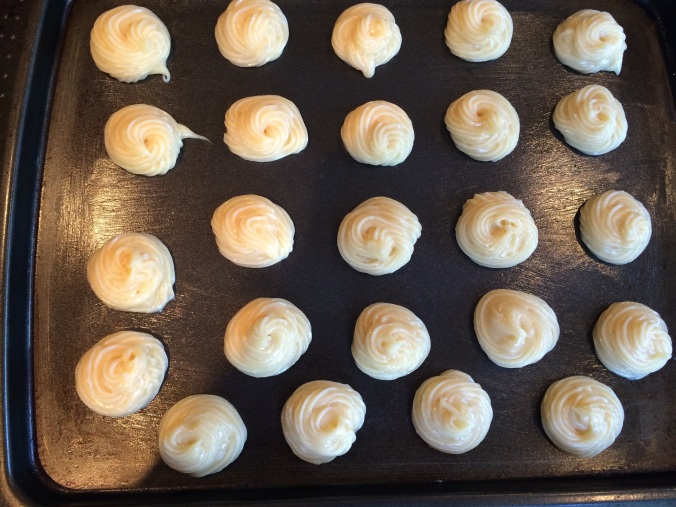 In all honesty, I didn’t have any faith my pastry would rise as they started looking quite flat because of the heat, so I left them to it for about 15 minutes and when I got back…they had risen, HURRAH!

So my first batch didn’t turn out as greatly I was expecting, as you can some of the ones at the front were a little bit squashed looking, but I still had another batch to go so I wasn’t too worried.

(I actually wish I skipped this step as I found that my nicely risen profiteroles came back out a little squashed – ho hum.)

At least the second  batch turned out better!  I put aside all the profiteroles to cool down while I made the cream filling.  Instead of following any of the recipes, I just did some guess and taste work.  I actually thought I had two pots of double cream but it turned out I only had the one and didn’t have time to go and get a second one, but nevertheless I cracked on.

(It was at this point that I uncovered some dark chocolate chips so I added that to the bowl to melt as well.)

As you can see from the recipe, it mentions adding the juice from half an orange, but I skipped this step – I wanted my chocolate sauce to taste chocolately and not orangey.

Instead of pouring the chocolate over a tower of profiteroles, I dipped the top of each one into the sauce so that each profiterole got an even helping.  And here is the finished result – not bad for a first try, eh?

And as it is customary, I got the first try!

Have you ever tried to make profiteroles? If so I would love to know how yours turned out in the comments below and whether you tried anything differently or used different flavours.