My eldest sister has been visiting this week with her son Isa (pronounced E-sa).  She could fool anyone that she is also quite heavily pregnant and due to give birth at the end of this month because she can still move about quickly, has no issues in bending down to the floor and can still chase after Isa.

He’s only just learnt to walk and though quite wobbly, he’s damn fast.  He is also in that stage where everything he sees or picks up needs to be inspected via his mouth first, and not only that but he is teething and the dribble is everywhere…EVERYWHERE.  But aside from all that, he’s so freaking cute!  I have been trying to teach him to say “Sam” but he hasn’t quite grasped it and instead says something like “Mem”, so I take that as being close enough for now.
Today he has “inspected” the following:
There might have been more, but I probably wasn’t looking.
Since my sister got married a few years ago and up and moved to London, I don’t get to see her as much as I would like, therefore I always cherish the times when I do see her and my nephew, and it’s extra wonderful because at least I got to see in the new year with them.
Bets have already started within the family as to what she will have next (even my sister doesn’t know) so it will be one big surprise.  I reckon she’ll have another boy – she churns out cute kids no?

Farah & Isa
I would write more, but I suddenly have an immense craving to have some more pasta.  Until next time! 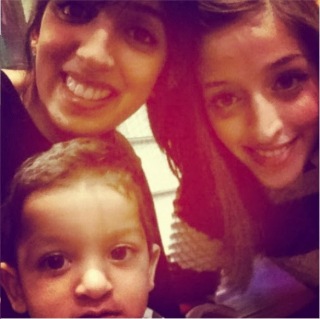